A few weeks ago, Indian watchers were confronted with figures that the Indian government had said, unofficially however, would never materialize. But Bangladesh was already biting India’s heels even in 2020. This author had a feeling it would soon overtake India unless proper policies were put in place.

Such apprehensions are justified. IMF data shows how – since 2020 – Bangladesh has managed to post a higher GDP per capita than India, and may continue to be ahead of India – on this figure – for the foreseeable future.

It is doubly impressive. First, because Bangladesh is small compared to India, both in terms of size and total GDP. Still, it took the lead and beat India on the GDP per capita score. India cannot even hide behind the fig leaf that it has a large population. Bangladesh has a significantly higher population density – of 1,106 people per km2 against 415.4/km2 for India. If Bangladesh had been “endowed” with the same population density as India, its GDP per capita would have more than doubled, leaving India far behind.

This author recently had discussions with Bangladeshis in Dubai. They lamented the fact that their fellow citizens are leaving Dubai. But why? They said that Bangladesh has started offering job opportunities that pay at least 600 takas a day, even to unskilled workers. Wages are rising in this country. Dubai has suddenly become less attractive to Bangladeshi migrant workers.

Ask the police in India and they will tell you how the influx of illegal migrants from Bangladesh has drastically decreased. Not because our immigration or security officials have become more vigilant, but because their own country offers more opportunities. Instead, you have Biharis from India migrating to Bangladesh these days.

So what has Bangladesh done that India has not been able to do?

Let’s first look at the areas in which Bangladesh does not excel.

The IMF in its report stresses that Bangladesh needs to reduce financial sector vulnerabilities and develop capital markets, India is well ahead of Bangladesh in its capital markets and money markets. But that hasn’t stopped investment from flowing into Bangladesh thanks to the profit potential that its government grants to its entrepreneurs. 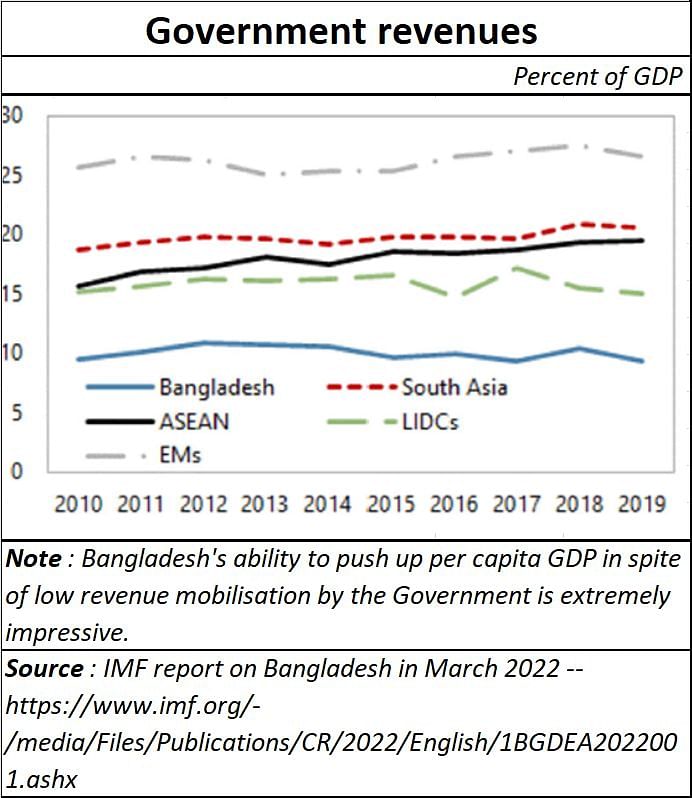 The IMF believes that Bangladesh needs to improve its investment climate and increase its productivity. It indicates that higher incomes are needed to achieve development and social goals in a financially sustainable way. The government’s ability to generate revenue through taxation is woefully weak. He must learn from India where the government continues to mobilize higher revenues, even when unemployment remains high and private incomes have been stunted. But the silver lining here is that it has prevented Bangladesh from fattening its politicians and bureaucrats with huge benefits (official and unofficial).

As the IMF reports, “income as a percentage of GDP has remained consistently low and lagging behind peers, with the gap to the median of other countries in the region and emerging markets (EM) widening. since 2013. Bangladesh needs to spend more. on health, education and social safety nets and stimulate investment in infrastructure. Burt then India’s spending on health and education is also dismal.

Furthermore, as the IMF report states, “although the risk of debt distress remains low, the risks associated with an increase in the debt service-to-revenue ratio have increased, and development and priority spending, including understood to support the recovery, will continue to put pressure on public finances.”

Yet, despite these shortcomings, the government responded quickly and decisively to address the economic fallout from the pandemic. Remittances exceeded pre-crisis levels, supporting consumption and moderating the current account (CA) deficit to 1.3% of GDP in FY21 from 1.7% in FY21. FY20. Unlike India, it has a steady bearish current account surplus. “However, the current account deficit is expected to widen to 2.4 percent of GDP in FY22 as imports rebound and remittances moderate,” the IMF said.

Growth is expected to pick up to 6.6% in FY22, supported by a strong rebound in exports, continued implementation of stimulus packages, and accommodative monetary and fiscal policies. The fiscal deficit is expected to peak at 6.1% of GDP in FY22 as authorities ramp up pandemic-related spending.

Another factor, which India rarely mentions, is that Bangladesh’s economy grew because the government of Sheikh Hasina (she was prime minister from 1996 to 2001 and again from 2009) refused to give free rein to fundamentalist forces. Any attempt to polarize people along community lines is quickly, quickly and decisively trampled on.

This despite the fact that Muslims make up almost 90% of the population). Sometimes, when community fires in India tend to get bigger in Bangladesh, the government steps in and aggressively extinguishes those fires. And surprisingly, although his party (Awami League) had a great alliance with 14 other parties, the government endured.

Interestingly, the Constitution of Bangladesh grants freedom of religion, thus officially becoming a secular state. This even if Islam is a “state religion”. The government gives every citizen “the right to profess, practice or propagate any religion; each religious community or denomination the right to establish, maintain and manage its religious institutions; and provides that no person attending an educational institution shall be required to receive religious instruction, or to participate in or attend any religious ceremony or worship if such instruction, ceremony or worship relates to a religion other than hers “.

It is perhaps this emphasis on social harmony and the rejection of fundamentalism that has enabled the country to develop economically, despite all the shortcomings pointed out by the IMF. India seems to have forgotten it. The latest edition of The Economist had a scathing indictment against the government on this issue.

Expect Bangladesh to continue to do well. Any country that ensures that GDP and per capita incomes can be increased year after year is a country that is bound to move forward.

The author is a consulting editor at the FPJ

(To receive our E-paper on WhatsApp daily, please click here. We allow the PDF of the paper to be shared on WhatsApp and other social media platforms.)