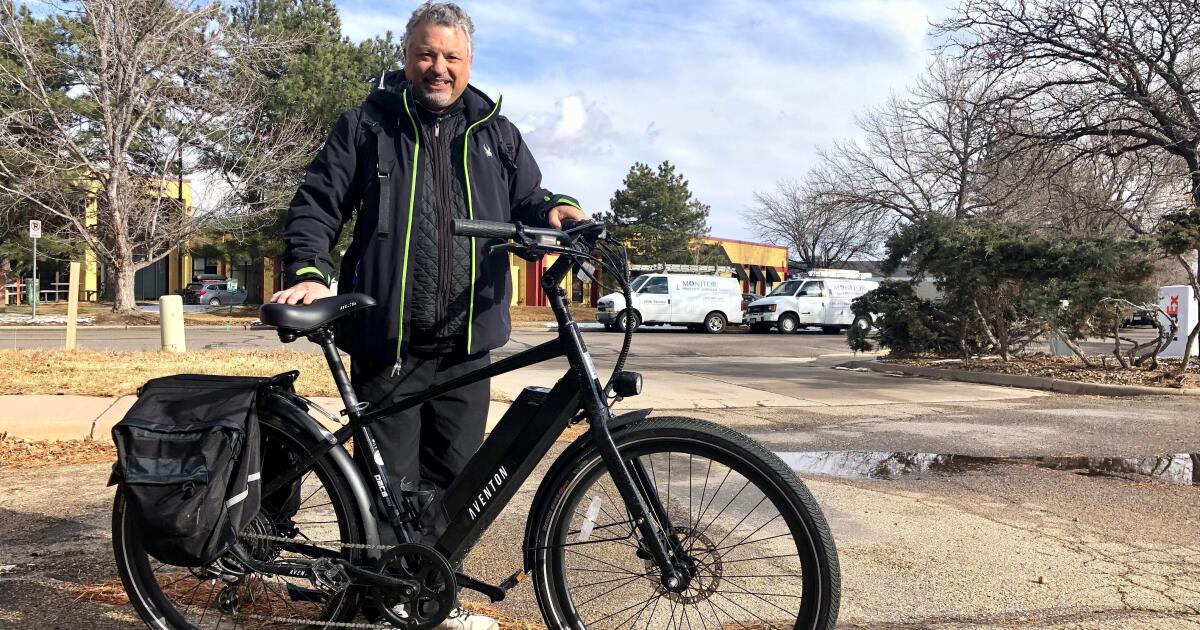 It looks like the sound of passing e-bikes is going to become increasingly familiar during rides.

These short trips mean that many of us are good candidates for replacing fossil-fuel vehicle trips with e-bike trips. trip. The same study found that if just 10% of the urban public did the same, overall transport emissions would decrease by about 10%.

Here enters the Can Do Colorado eBike program – After a successful mini-pilot in fall 2020, in spring 2021 the Colorado Energy Office awarded a grant to 5 organizations including Boulder’s Community Cycles. Each organization has been tasked with equipping a portion of the 156 participating low-income essential workers with new e-bikes and all necessary accessories.

Joshua Robinson, 36, was one of the selected entrants and he is thrilled.

Robinson is so pleased with the functionality of his e-bike that he has ruled out buying a car.

“There aren’t many situations where I would necessarily need a vehicle. Even with the snowboard there is a bus that goes up there. And sometimes, if I want a little more range, I can put my bike on the bus and ride it from there. And especially with the rates as they are right now. I don’t know if you’ve looked at this, but the rates are crazy. So I don’t really see myself in the foreseeable future having a car…or needing a car, really,” Robinson said.

Fellow participant Howard Treppeda agrees with Robinson that the program has had a positive effect on life, although transitioning to the e-bike lifestyle can take time and dedication.

“As soon as I get on my bike to leave work, I get a little tired and sometimes,” says Treppeda. “I’m thinking about taking that bus but the minute I’m there…I think if people just try – not two weeks, they give three months, then they won’t want to do otherwise. My gas money goes to buy a nice bottle of wine for the weekend.

Participants in the Can Do Colorado program log their travel information on an app developed by the National Renewable Energy Laboratory. Senior Program Manager at the Colorado Office of Energy, Sarah Thorne has reviewed this data and feels that overall the program has been very successful.

Thorne says the positive results of this pilot program dovetail nicely with federal and state plans to encourage the use of e-bikes as a mode of transportation in the future.

“So I think in the future there will be a lot more programs available,” says Thorne. “It’s not just about us. It will be our neighboring states, it will be smaller communities – whether through their utility or local government, and that also includes federal infrastructure funds – all of that will be available within six to next nine months and I think it’s going to really change what’s available to people and their ability to get in on any kind of eBike action.

From the state, to the bike shop, to the participants, there was agreement on another factor needed to make e-bikes a successful part of the transition away from fossil fuels – cycling infrastructure. Protected bike lanes, secure bike storage, robust pathway systems and e-bike compatible racks on buses are all examples of infrastructure that keeps bike users safe and comfortable on the roads, trails and when traveling in conjunction with public transport. All of these things will be essential if e-bikes are to win over commuters and entice them out of their cars.

This story is part of a collaboration between Rocky Mountain Community Radio coalition stations. The reports will highlight the transition from fossil fuels in the Mountain West region. Listen throughout Winter and Spring 2022 for more stories from our partner stations, including KSUT.

“Hey, Biden, do you want to close the racial wealth gap?” Cancel student loan debt. Here is a pen. | Calavia-Robertson