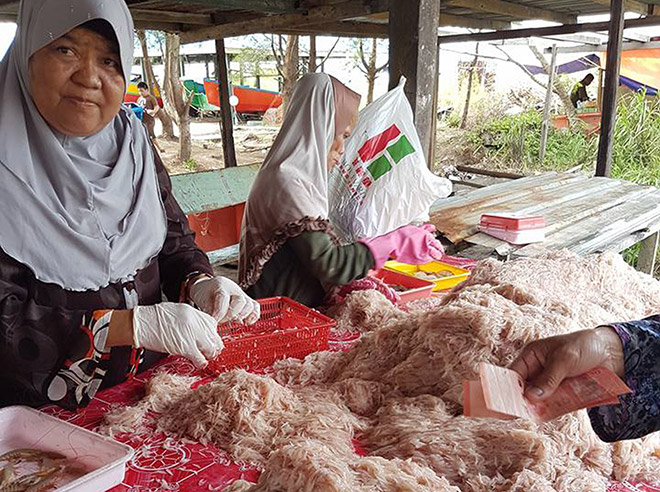 A member of Buntal’s family sells bubuk at a temporary roadside stall.

MIRI: Here, the full-time and part-time fishermen are happy with the return of the bubuk season which brings them additional income once a year.

‘Bubuk’ are tiny shrimp while ‘samuan’ are larger shrimp bought by locals to make ‘belacan’ (a shrimp paste) and ‘cencaluk’ (small fermented shrimp) which can be sold between 35 and 50 RM per kilo.

Buntal Jaluddin from Kampung Batu Satu, Lutong, said the shrimp season normally takes place in February or March, and lasts from three weeks to a month.

The past week has seen many fishermen from Kampung Batu Satu, Lutong catching bulk bubuk from seven to 11 trays.

“The Bubuk caught by fishermen can reach 11 trays, which means additional income for fishermen and their family members,” Buntal said yesterday at Batu Satu Lutong beach.

He said today he was focusing on catching the bubuk his customers are waiting for at his stall run by his wife and family members.

Currently, a kilo of bubuk costs 8 RM but can drop to 3 RM per kilo if the catch is plentiful.

A check carried out by the Sundaypost reporter at the stand along the Lutong-Kuala Baram road showed that the bubuk was sold at RM8 per kilo. Vendors also present for sale prawns and fresh fish caught by fishermen.

â€œNow is the time for fishermen to catch as many trays of bubuk as possible to be sold to local residents to turn into belacan and cencaluk,â€ he said.

Most fishermen use the “sobor” (landing net placed in front of the fishing boat) to catch floating shrimp.

He said belacan enthusiasts here are thrilled as the bubuk season is short and fishermen compete for good catches on a daily basis.

â€œThis week is just the start of the bubuk season because the color is still not red. It will turn red when they mature and are in demand by belacan manufacturers, â€he revealed.

Fishmonger Latipah Drahman said her family members took the opportunity to catch some bonus bubuk for the family.

Fishermen can earn up to a few hundred ringgits on a good day, and even a few thousand ringgits a week.

She said that here in Lutong, not only Malaysian fishermen but also Iban, Chinese and other races join together to catch bubuk under the scorching sun because there is money to be made.

What is Adjusted Gross Income and Why Should You Care?